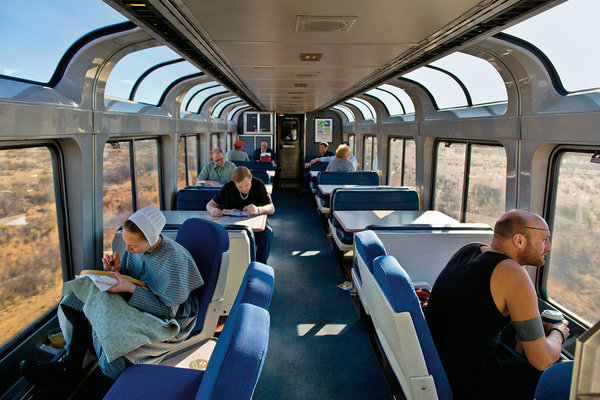 I've always wanted to take a rail journey. It's possibly the most unvarnished look you will ever get of America. This story from Nathaniel Rich of the New York Times details the wonders still to be found by rail. How could you possibly find out that much about your fellow passengers on a 737 flight?

Growing up in the 60's when the jet age overtook the travel market by force, you didn't even think of going anywhere by train. That was crazy talk. Yet, all my life I was exposed to rail travel thru music, film and TV.  Can you imagine pulling off the sleeper berth party scene from Some Like It Hot in an airplane? It just wouldn't work. Hell, we even had it in a pop song that went classic with Arlo Guthrie's City of New Orleans.

How can you listen to this and not want to ride the rails?

The longest rail trip I've taken is from Ft. Worth to Dallas on the TRE. I tried to take a train from Seattle to Fort Worth when I was in the Coast Guard, but it cost over $1500 and took 14 days. Instead. I took a connecting flight thru San Francisco and got jacked by Air Marshals pre-9/11. But that's another story.

I also hopped a freight train from Federal Way to the opposite side of the Kingdome in Seattle after seriously mistaking which track it was going to take. I did an amazing 6 Million Dollar Man impersonation dismounting around 35 mph, but that is yet another story. I digress...

I plan on taking The Sunset Limited someday just to say I did. I've been to LA numerous times, just never by rail. It's kind of like a driving Route 66 thing. That's on my list as well even tho I've already covered most of it in bits and pieces, especially thru Oklahoma, Texas, New Mexico and Arizona. Just not Chicago to LA complete, which brings us back to rail.

Possibly the most famous passenger train ever is the Santa Fe Chief. It ran from Chicago to LA and boasted the finest of amenities. In an era when you had to enjoy being stuck in a box for several days from Point A to Point B, they actually tried to make you enjoy the experience.

The City of New Orleans and Sunset Limited are still around, but they probably won't be for much longer. The trip is much less luxurious and still overpriced. But the experience, along with the view, is still priceless.

If you miss the train I'm on, you can hear the whistle blow a hundred miles.

I got my first record player in about 5th or 6th grade (prior to that, Dad tended to frown on my using his studio/audiophile quality turntable).

My first 3 45 rpm records were: A Horse with No Name, City of New Orleans, and [35 years prescient] Goodbye to Love.