See how many celebrities you recognise. Bonus points if you know who the hell Suzy Knickerbocker is and what her significance is on Batman. No Googling!

Who Knew Space Surveillance Command was in Archer City?

But I didn't know the NAVSPASUR system had been turned over to the Air Force in 2004. It used to be run by the Navy. Now it looks like it's going to be run by nobody. Thanks to the sequestration, the aging Air Force Space Surveillance System is being shut down and replaced with modified operating modes for the Perimeter Acquisition Radar Characterization System at Cavalier Air Force Station, N.D., and for the space surveillance radar at Eglin Air Force Base, Fla.

Why am I reminded of Charlie Sheen in The Arrival?

Kickapoo Station had a budget of over $2M a year just for electricity. Brazos Electric is not going to be happy about that. 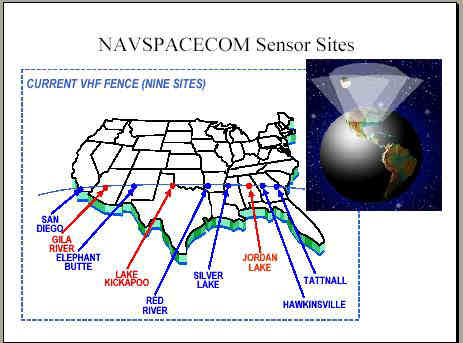 Wildly inaccurate map. But they got San Diego right.

Check out the vicious perimeter security.
Posted by RPM at 7:20 PM 2 comments: Links to this post

As I've mentioned before I am addicted to Aces High, an online massive multiplayer WW2 fighter sim. The game has a HUGE learning curve because the flight model is very realistic. It is a simulator, not an arcade game. You have to know how to fly a plane or you will die and do so very quickly.

But even with 1000's of hours of flight time under my virtual belt (been sim flying since 1996), I could never pull off some of the maneuvers this guy does in a P-47. Now to be honest this is not one sortie. It's not even the same model of Jug. It's a compilation of flights that jump between a N model (light color) and an M model (dark color). But it is a fabulous demonstration of what a Jug is capable of.

The M is a beast, literally. It is very heavy and even with that massive Pratt & Whitney R-2800-57-C Double Wasp engine, it has a low thrust to weight ratio. The N model is even worse. But if you get your "E" (energy/momentum)  built up and the right guy at the controls that knows how to stay on the razor edge of out of control and milk the last bit of maneuverability out of it, you can do some amazing things in a Thunderbolt. Add 8 .50 caliber guns and it's as deadly as they come.

I was beaucoup impressed with this guy's stall fighting abilities starting at the 2:50 mark. That is just incredible. In fact this whole video is incredible. Marc Tardif did a fantastic job not only flying but putting this video together.
Posted by RPM at 8:40 AM No comments: Links to this post

Pretty savvy marketing campaign to help Graham Drive-In win a free digital projector from Honda. The video hasn't quite gone viral yet, but it has spread as far a Japan where newspapers have been calling for interviews.

The Graham Drive-In is one of only 15 remaining in Texas and needs the new digital projector to stay open. You can read more in the Startlegram.
Posted by RPM at 3:02 AM 3 comments: Links to this post

GEORGETOWN, Guyana — Authorities in Guyana say smugglers have found yet another way to smuggle cocaine out of the country.

The Customs Anti-Narcotics Unit says a man was caught trying to ship 16 kilograms of the drug to the U.S. in hollowed out okra pods. Unit director James Singh said Thursday it was the first time he's heard of someone trying this with okra, which is known as ochro in Guyana. Singh says on a one-to-ten scale he would give the smuggler a "four for innovation."

Smugglers in Guyana have attempted to use many products, including skin lotion, frozen fish and hot pepper sauce.

In this case, there was swift justice. Hadrick Cummings was caught at the airport Monday and pleaded guilty Wednesday. The 25-year-old was sentenced to five years in prison.
Posted by RPM at 11:17 AM 3 comments: Links to this post

Now THAT'S what I call a goal line stand!
Posted by RPM at 5:51 PM 1 comment: Links to this post

On The Radar: Lay The Favorite

Just stumbled across this 2012 flick that literally slipped under my Doppler. A full recalibration of the Flickmaster 5000 is currently underway.

The film is based on Beth Raymer's memoir released by Random House in 2010. It's a fun and juicy romp thru the life of a professional gambler starting from the ground up to running an offshore book with it's predictable speed bumps. But you quickly become invested in the characters and their storyline. It's a great script.

Well worth 94 minutes of your time.
Posted by RPM at 6:01 AM No comments: Links to this post