Netflix of the Week


In 1974 The Sporting News unanimously awarded Bing Russell (Yes, the same Bing Russell that was the Deputy on Bonanza and the father of Kurt Russell) Class A Executive of the Year. That's the equivalent of winning the Oscar for Best Picture by a rookie independent producer with a film about how bad Hollywood screwed up.

I like the cut of his jib.
Posted by RPM at 10:22 PM No comments: Links to this post

"Feel Good" story out of Houston

Posted by RPM at 6:58 PM No comments: Links to this post Take visuals from Mad Men and mix them with lines from Archer.
Whaddya get? Greatness. Posted by RPM at 2:12 PM No comments: Links to this post

I got those "Up at 4:30, my tummy's upset and there's a demon crawling through my jejunum" Blues.

Kinda blew it all on the title, but you get the idea. This is what I get for hitting up a sketchy place for dinner on the run. The one up side of being awake in the middle of the night is the quality entertainment. Make Room for Daddy, Petticoat Junction, Wanted Dead or Alive. Almost makes it worthwhile. 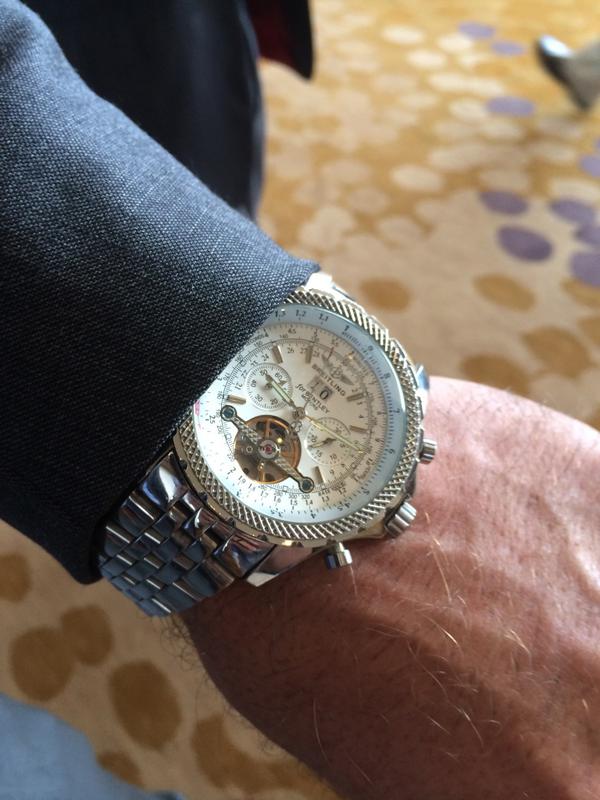 Texas Tech head coach Kliff Kingsbury has tried extremely hard to craft an image for himself as the swaggy, hip coach. Sometimes it's not that hard to do, I mean this is Lubbock we're talking about. But just because you can fool the yokels in Hub City, don't go getting the big head.

Example: Kingsbury was spotted at Big 12 Media Day sporting a very tasty Breitling Mulliner Tourbillon that retails for around $100,000. Slight problem, upon not so closer examination it turns out to clearly be a $100 knockoff. Swagger fail.

This is a classic example of style before substance. Yes, Kliff wants to be the James Bond of the Big 12. But actually achieving that is hard and extremely difficult to budget if you don't have an endorsement deal, especially on a Texas Tech Head Coach's salary. So you turn to eBay for a cheap way around the problem. Just remember the internets is a two way street and full of actual watch guys that absolutely have nothing better to do than sniff out posers then take great joy in pointing it out when they do.

The whole ugly story on Deadspin. Guns up, Lil' Buddy. Guns, up.
Posted by RPM at 9:47 AM No comments: Links to this post

Posted by RPM at 5:44 AM No comments: Links to this post

Posted by RPM at 10:43 PM No comments: Links to this post

Posted by RPM at 2:28 PM No comments: Links to this post


SPRINGFIELD, Ill., June 30 (UPI) --A truck driver allegedly saw an Illinois state trooper speeding on the highway while talking on his cellphone, so he decided to honk his horn in order to show his disapproval.
After his judgmental toot, the trooper pulled Brian Miner over and threatened to give him a ticket for unlawful use of a horn.

Miner taped the entire encounter and posted the clip on YouTube.

The officer is aggressive at first, but he changes his tune after Miner informs him that their exchange is being recorded.

The trooper eventually apologizes to Miner and declines to give him a ticket.

"And that's what happens when they know you're recording," Miner says near the end of the clip.
Posted by RPM at 8:51 AM 1 comment: Links to this post