Most people won't get it, but hopefully those that do will get a snicker out of it. First a quick history lesson (and as we all know that's always a good sign when telling a joke). The Powerstroke diesel engine Ford used until 2007 was built by Navistar who manufacture International trucks, formerly International Harvester who also built Farmall tractors which were in the movie Jayne Mansfield's Car with Kevin Bacon.

I know, it's a long way to go for a joke but I am the King of the obscure movie reference.

I also have a long history with International Harvester and Farmall. After trading in his prized draft team my Grandfather bought a Farmall H and later a Super M. I plowed many an acre with that Super M standing on it's rear wheels well into the 1990's. I also hauled many a load with an International Eagle. It was the nicest truck in the fleet and I got it as a reward for hard work from my boss. So you can see Cornbinders and I go way back. I actually wanted a hood ornament off a Sightliner or Emeryville, but those things are rarer than rare. They had a face only a Mother could love. I considered using one off a Transtar, but as you can see they fit a curved surface.

International pickup ornaments were also made for a curved surface. But they sure look cool! 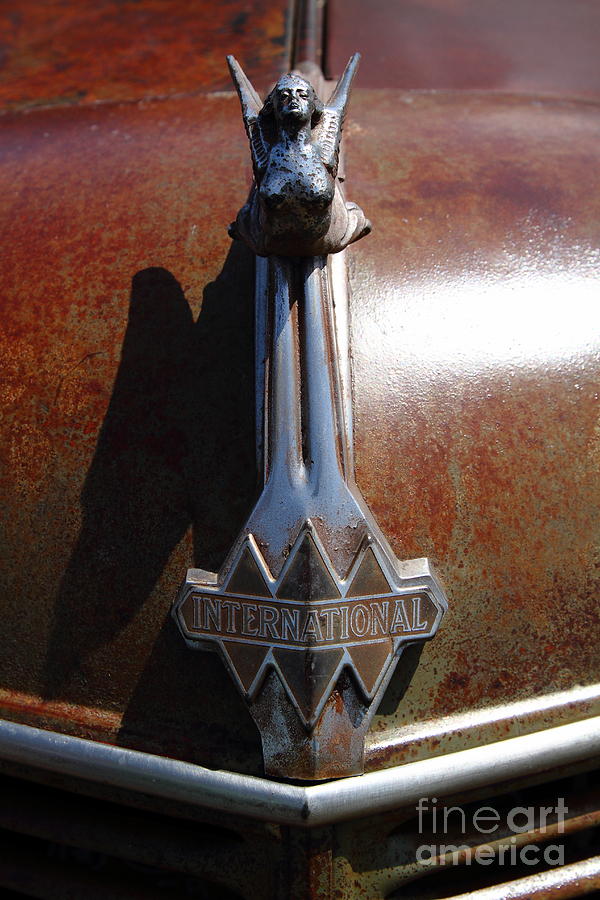 Most of the Farmall tractor IH emblems are too small and would be out of proportion on the grille, plus to be completely honest they are cheap looking stamped metal. I settled for a happy medium and went for a billet aluminum receiver hitch cover that surprisingly turned out rather well other than being slightly off center thanks to the grid of the brush guard. The angle of the picture makes it look even worse but it's actually level with the Ford emblem.

Oh yeah, one last thing I forgot to mention. Before he switched to Ford, my Granddad drove International trucks. He switched in the early 50's after my Dad hit a mule with the truck head on late one night (The Godfather pales in comparison that scene from what I was told) and the Ford dealer made him a better offer on the trade-in. Free mule head removal?
Posted by RPM at 12:37 PM

Hey, if anyone can appreciate a roundabout story buildup, it's me.

Plus, I have very fond memories of Dad's 1966 Scout that I got to drive @ the deer lease, and @ our friend's Jacksboro/Jackistan 'ranch' (located near the east end of a present day row of wind turbines, W-NW from Barton's Chapel) as a kid.

Good post, and good looking addition to the brush guard. Oldest Son drives a '97 onefiddy (which he spent $500 for, and I've spent ~$2500 for liability coverage only on) :-( , but he yearns for a kerosene burner.

BTW, what the heck is that red truck on the left, with the lower set of windshields?

That is an International ACO-195 Sightliner. The one on the right is a DCO-405 Emeryville.

D'oh! Yeah, I re-read your caption and Googled it - an early CO, apparently a fairly short run ~'57-62-ish, used where overall rig length was an issue (it featured a 48" cab), and prized by some, who preferred its gasoline powerplant.