Shaving Yourself Is For Suckers!

I recently became a fan of Community. I'm late to the game on this one, but it's a great show. A recent episode featured Jeff (Joel McHale) spending time with Pierce (Chevy Chase) whom he can't stand, but needed to keep away from the study group.

Pierce takes him to Silvio's Barber Shop and introduces him to the lost art of the straight razor. Check it out above. I skipped ahead to the pertinent part. It's a great episode and it really hit home with me. I'd never had a straight shave in my life. I'm an old school kinda guy and that just didn't sit well with me.

I'd already invested in new suits, tailored shirts and Italian shoes. But I hadn't invested a penny in what would be displaying them. I did a search on Yelp and found the #1 Barber in Las Vegas by far was Elliot & Co. I arrived a bit before noon on Saturday and walked in with no appointment. Normally that would have been the worst possible time, but Elliot had a no-show for 11:45 and had the rest of the afternoon off because his Father was in town.

When he asked me what I wanted I told him, "I'm the canvas, you're the artist."

He proceeded to give me the Ultimate Series (Signature Cut/Ultimate Shave/Beard & Moustache trim). The hot towels were borderline hot as I could stand, but they worked their magic. After a few minutes a hot lather and Johnny Cutthroat went to work.

A straight shave is a unique experience and a lost art for men. But Elliott Chester is the undisputed King. He's also very dedicated in helping young barbers and reestablishing the men's barber experience. He teaches classes after work at regional barber colleges.

Elliott is a genuinely nice guy that is dedicated to his craft. He's also originally from Tyler which brought up Earl Campbell. We had much to talk about and I promised to send him some of Earl's Hot Links. He also got a kick out of my explaining the inspiration from watching Community. He'd never heard of it but loved the premise of the skit.

After the shave he applied a mud mask and more hot towels, then shampoo and cut.


Somehow he managed to make my grizzly old mug attractive. I got several compliments that night and I owed it all to Elliott & Co. The man is truly an artist. 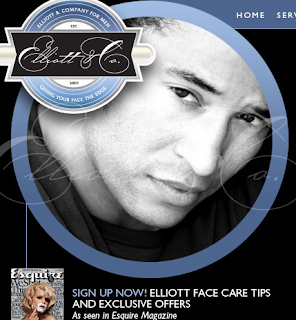 Bottom line is guys, it's time for men to take back the Barber Shop. No more Supercuts or hair salons. We're men and we deserve a manly experience. Put a straight razor to my jugular and make me like it!

Shaving yourself is for suckers!
Posted by RPM at 6:02 AM