Arizona, Take off your rainbow shades

Well plans got rearranged  I left home later than planned and hit Albuquerque after sundown. Not the best time to be taking pics. So possibly we'll do the Breaking Bad tour on the way back. Yeah, it's a limited appeal thing, but I think die hard Los Pollos Hermanos fans will dig it.

Instead I pushed thru to Grants, NM and spent the night. That set me up perfectly to spend all day at Petrified Forest National Park, which was a very good thing. It's a tiny National Park as National Parks go, but very high quality. Nature only took about 225 Million years to turn a equatorial rainforest into a southwestern US masterpiece. 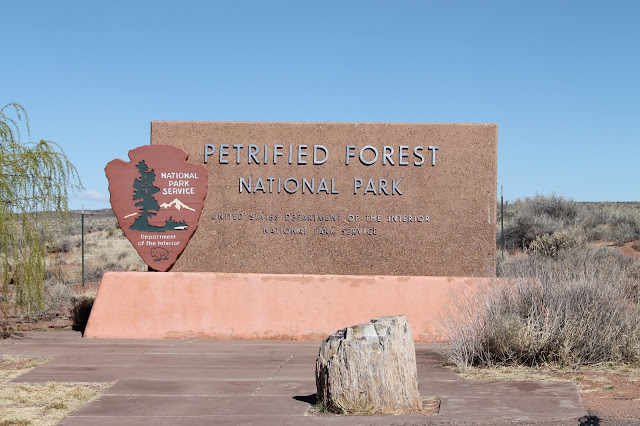 The park was much (I mean about 20 times as much) busier than I expected and the majority of visitors seemed to be from Germany, Norway or some Scandinavian/European country that doesn't "speaky the English". But, they were extremely friendly. There was actually a crowd at most of the pull outs along the 26 mile drive and I had to sit and let a few waves go past just so I wouldn't be jammed among the masses trying to get a good photo angle and wind up like Veronica Corningstone at the San Diego Zoo.

Watch "Anchorman: The Legend of Ron Burgundy" if you don't get the reference.

To be honest I was happy to wait. Did my heart good to know people traveled half way around the world to look at one of our National Treasures. 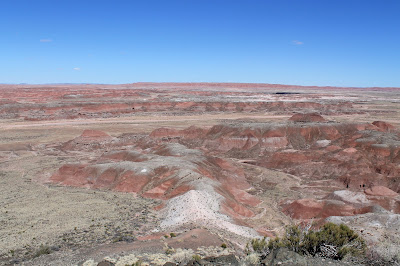 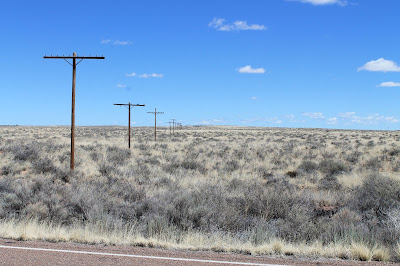 The remains of Route 66

After spending most of the day there I cruised a few remaining sections of Route 66 including Winslow, AZ. I didn't see "the girl, my Lord, in a flatbed Ford" but I did see the famous Wigwam Motel and the actual 'Mater.

Next a quick haulass down I-40 to Meteor Crater before they closed. Note to Chevrolet, the Z-06 Corvette will not outrun a C300 Mercedes. At least he wasn't trying very hard to anyway. Pretty sure if we pushed it to top end he would have smoked me, but under 140 I was a huge PITA to the Chevy.

Sorry no pics of that, I was a tad busy.

The previous paragraphs may or may not have actually happened and can not be used a evidence in a court of law unless you have dashcam footage. But I do have a pic of Meteor Crater which is the result of a... wait for it... meteor impact. It's over 4000 feet from rim to rim and over 500 feet deep.

In other words a big ass hole in the ground and they have the scientific evidence to prove it! 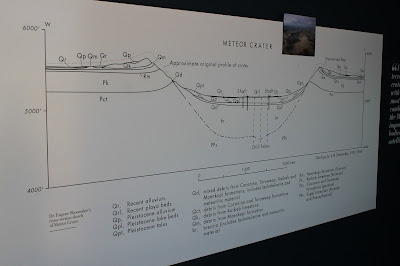 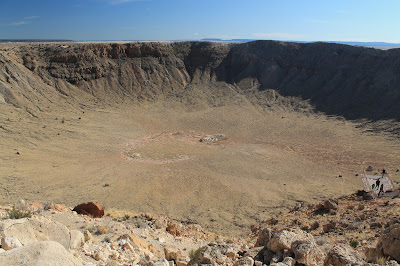 After Meteor Crater I decided to bail out at Williams, AZ for the night. Tomorrow I'll be killing 2 Bucket List items at the same time. I'm taking the Grand Canyon Railway to... wait for it... The Grand Canyon. I've always wanted to take a train trip and while this is a short ride, it does qualify. I've also never been to the Grand Canyon before, ergo 2 birds in 1 very overpriced stone.

I'll have more pics after I get to a hotel that doesn't have wireless slower than the time it took to create the Petrified Forest. Unless the antique train falls into the Grand Canyon and kills us all.

Cool update - too bad about the girl in Winslow...

Since you referenced Mark Lindsay - Several years ago I was the liaison/paymaster for the musical talents appearing at a local festival. While someone else was tasked with cartage service from the airport, I took care of getting the musicians from our 'green room' (motorhome) to the stage and back.

I got to hang out for several minutes with Mr. Lindsay pre-show, as he drank some veggie-juice concoction (no alcohol) that he said worked wonders for his voice. Must've worked, as he sounded great.

Near the end of the show, I was waiting to escort him back to the RV, when a nice gal, maybe a couple of years my senior - who'd driven up from Corsicana - approached me with an LP cover and asked if I could get her an autograph and picture with ML, as she'd had his posters in her room as a teenager.

As it happened, there were quite a few fans between the stage and the RV, but I managed to get her a quick meeting. About a week later I got a nice thank you card (forwarded through the Chamber of Commerce), with a copy of the picture she got with ML.

Look forward to the GC pics - I've never been there, either.