Get Outa The Way! 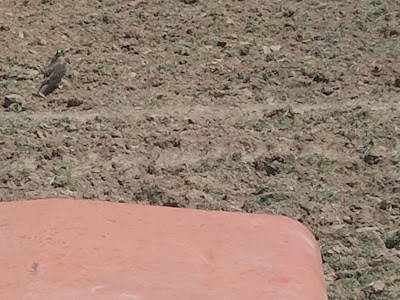 I'm not the greatest Ornithologist but I'm pretty sure this is a Peregrine that was defiantly blocking my path while I was plowing today. He's hard to see because it's a bad cellphone pic, but he's in the upper left about 10 feet in front of me giving me a "Go To Hell" look.. It started out with one, but before the day was done there were more than a dozen that were looking for an unearthed meal and were equally as surly.

It was an impressive sight and I wish there were better pictures, but I had shit to do and time was wasting.

I plowed 40 acres of The South40 yesterday with a tandem disc (Don't to the math because it won't add up) and replowed 60 acres today with a tandem disc and a roller today after we put out fertilizer. (See? I told you!) But the Peregrine decided to dine on the newly served worms, bugs and other subterranean delicacies today and were very defiant in giving up their turf when I drove past.

2lb Bird vs 4 Ton V8 Massey Ferguson diesel. You know who won that battle, but the birds were beautiful. Their defiant attitude was actually an inspiration to me and I wound up with Tom Petty stuck in my head for the rest of the day which in it's self isn't such a bad thing, especially when you don't have a radio in the tractor.

I also went thru a selection of John Phillip Sousa marches in my head, but he doesn't have any hip videos. Being in the World's Largest Non-Nuclear Coast Guard Marching Band will do that to ya.

After finishing up with the plowing I had more STD (Shit To Do) on the agenda. Last week I sent the FICM (Fuel Injection Control Module) on my F-350 off to get repaired and upgraded by Ed at ficmrepair.com. Ed is the hands down #1 guy to repair your 6.0 Powerstroke FICM. There are many who do the same work, but none of them get the praise Ed does from his customers. Not even close. It came in today's mail and I needed to re-install it to be ready for a trip tomorrow.

After several scarred knuckles, which come way too easy now that I take blood thinners, I managed to get everything plugged back in and secured. Hit the key and it busted right off just like it was supposed to. (Thank you, Baby Jesus!)

There are 2 computers on a Powerstroke and the FICM is the computer that control the fuel injection system on Powerstroke engines. The other computer controls the rest of the engine and the transmission. I've already upgraded that computer, this was the final seasoning to the entree. Now I should have more power when I need it, easier starts and an increase of 3-5mpg in fuel mileage if I can keep my foot off the throttle.

It's a bunch of technical gobbledygook, but it acts like an afterburner on a jet and adds more fuel after the combustion has occurred in the cylinder. Basically throwing fuel on the fire. End result is faster throttle response and (if you keep your foot out of it) increased fuel mileage.

We'll see. I have a run to Louisiana tomorrow and I'll compare this trip vs previous ones to see if it was worth the extra $140 for the FICM tune. But initial results show a tendency of the rear dual wheels breaking loose at any time I desire. Kinda cool seeing a dually leave a long burnout from the stop sign without really trying.

I am no raptorologist either but I'm going to say that is a juvenile Swainson's hawk.

I say this not only because they like to follow farm equipment and partake of it its furrowed bounty but you can guess when an observant person who who has watched all the documentaries says,"You know, I'm not sure but I think it may have be a peregrine falcon"- it was a juvie Swainson's hawk.

I know you didn't caption the video, but that appears to be a hybrid of Wilburys with a Heartbreaker, and a Beatle thrown in for good measure.

That is so strange - my Grandfather, who died in 2003, and to my knowledge never owned a Powerstroke-equipped truck (I don't recall that he ever had any blue oval products) - used to tell me I didn't know FICM.

Maybe he was before his time...