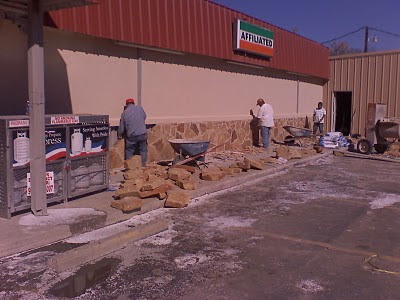 As the great Andre Agassi once said, "Image is everything!"

Check out the facelift we are getting! To be honest, I've been amazed at all the improvements we've had in the last few weeks. Expanded storage, repaved parking and now a new facade. The construction crew is doing a fantastic job. Check out how they integrated the existing drainage gutters into the design. Several people have asked who is doing the job and complimented their work. I honestly couldn't tell you the guy's name, but it's the same crew that did our other locations in Bridgeport and Decatur.

The store is going to be a proud fixture of The Limestone Capitol for years to come instead of looking like a 40 year old metal building that had seen it's better days.
(Now if they would just expand my freezer space!)

You'd never guess it's the same old Johnson's Grocery from 1971.

One funny story... When one of the owners came over to approve the new design, they wanted to match the bank's architecture next door as close as possible so they walked over and started taking lots of measurements and pictures. Odd as it may seem, banks do not appreciate people randomly walking up to measure their building and take pictures.

Lovely rock! ....and go fig? Banks don't like being examined that closely? lol