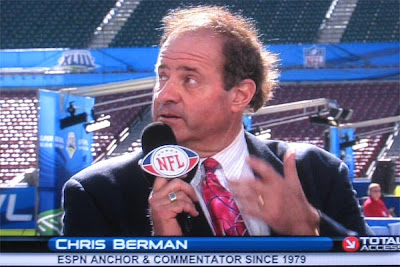 I didn't watch the Super Bowl, had to work. Quite honestly, I wasn't interested. I can't stand either team. But for morbid curiosity's sake I flipped over to ESPN to watch Sportscenter and see the recap. What I got was the last 90 seconds of the live edition and Chris Berman's wrap-up of the evening.

Loosely paraphrasing, he said Arlington, Texas was the epicenter of the sports world. The Giants came to Rangers Ballpark and won the World Series and now Green Bay has won the Lombardi Trophy across the street at Cowboys Stadium.

Thanks, Chris. Why don't you point out to the world that visitors come into our house and take the gold?

(Granted the Cowboys had a snowball's chance in Hell of making SBXLV, but you get my point.)
Posted by RPM at 2:21 AM