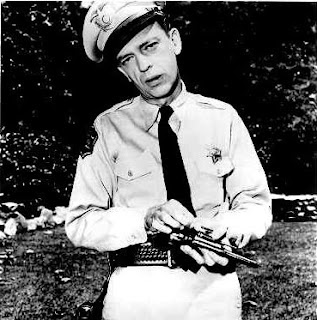 Well BroInlaw finally made it to the track just in time for the Nationwide race. So we all loaded up on the Suzuki and headed for the track. When we got there I got the usual dazed look of confusion from TMS traffic control. In the past I've always been able to reason with them that it's an ATV and park with the golf carts and Mules.

Tonight we ran into the TMS version of Barney Fife. He acted like we were criminals trying to break into the bank. I tried to explain it's an off road atv, he said it wasn't. He said if it was an ATV I needed a TMS campground pass. I asked where the campground pass was for the 30 or so atv's parked there. He threatened to have my Suzuki towed and me arrested for tresspassing (yeah, he went there) I decided to park off TMS pavement... For a bit.

At lap 20 I walked out to the truck and moved it up against the fence where I was going to park in the first place.

Honestly, I'd think TMS would embrace me. I haul fans in and out for free.
Posted by RPM at 8:38 PM