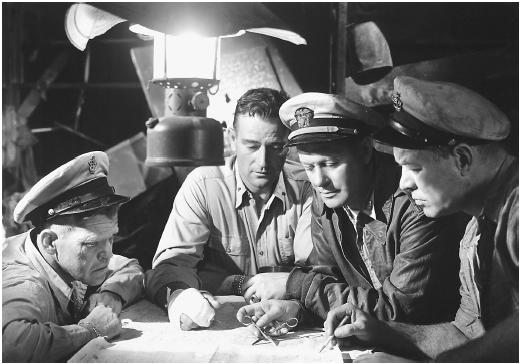 TCM's 31 Days of Oscar has some DO NOT MISS movies coming up this weekend. It's some of the very best patriotic and inspirational war films from Hollywood's Golden Era starting this afternoon at 4:30 with Gary Cooper in Sergeant York. The true story of Sgt. Alvin York, a pacifist from Tennessee that won the Congressional Medla Of Honor in WWI.

Then 7:30 Saturday morning 30 Seconds Over Tokyo with Van Johnson. Later 3 of my personal "Top 10". From Here To Eternity, They Were Expendable and Destination Tokyo.

From Here To Eternety is a masterpiece featuring the talent of Burt Lancaster, Montgomery Clift and a strong supporting cast featuring Ernest Borgnine and Frank Sinatra. Debra Kerr and Donna Reed turn in very racy performances for the times. Those times happen to be the days leading up to Pearl Harbor.

They Were Expendable is a marvelous movie starring Robert Montgomery and John Wayne. It is an inspiring tale that follows a PT Boat Squadron stationed in the Philippines during early WWII. The film started production under the direction of John Ford. But Ford fell ill and handed off his duties to an untested Robert Montgomery. John Ford had confidence in Montgomery. Robert was a Navy Reserve Officer and a talented actor. He understood the technical aspects of the film and the importance of getting the story told to the American public. He did not disappoint in his performance in front of and behind the camera. This may be my favorite film.

Destination Tokyo stars Van Johnson and Robert Walker as crew members of "The Ruptured Duck", a B-25 Mitchell bomber in Doolittle's Tokyo Raid. Spencer Tracy plays Lt.Col. Jimmy Doolittle in this film that follows the crew from secret training to crash landing on the China coast. Van Johnson turns in an unforgettable gut wrenching performance as Ted Lawson, pilot of the ill fated crew.

Destination Tokyo takes you into battle with Cary Grant and John Garfield aboard a US submarine that sneaks into Tokyo Bay on a spy mission laying the crucial groundwork for Doolittle's Raid and then has to fight their way back home.

TCM also has Torpedo Run with Glenn Ford and Ernest Borgnine, followed by Bombardier with Pat O'Brien and Randolph Scott. In all over 18 hours of Oscar winning war films. In between TCM has Raintree County, The Alamo, The Graduate and Gone With The Wind.

WOW! That's a pretty impressive weekend lineup for any network, and it's all uncut and commercial free.
Posted by RPM at 6:30 AM

Have been up all night watching -- love these old films. Raintree coounty is on next -- hav'nt seen that one in years. Great post --YOU DA MAN.