Watch Fever, I Haz It


I've been patiently looking for the right one, but I'm itching to make my next watch purchase. My first "Big Boy" watch, an Omega Speedmaster Professional "Moon". While there is some disparity to the "and only" part of their claim, there's no denying it was the first watch space flight qualified and the first watch worn on the moon.

But, it was not worn by Neil Armstrong, the first man on the moon. He left his Speedmaster in the LEM as a backup after the onboard mission timer failed. Buzz Aldrin, the 2nd man on the moon, wore the first watch. That Omega Speedmaster would later disappear while being shipped to the Smithsonian.

As for the disputed "only" claim you can thank Apollo XV astronaut David Scott. The crystal of his Speedmaster popped off and he wore a backup Waltham branded swiss made chronograph that was unauthorized. Omega considers this a "stowaway" situation and disputes the Waltham claim, personally I would be more concerned about losing the crystal.

The Speedmaster Professional was given the Snoopy Award by NASA following Apollo 13 for it's critical role during the manual burn that brought the stricken spacecraft home. Not surprisingly there's a bit of controversy with this as well. There are pictures of Jack Swigert wearing both a Speedy and a Rolex GMT. Who's to say which watch he used when. Jack passed away in December 1982 so we will never know. 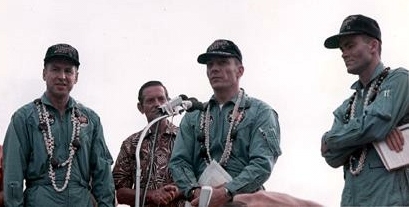 No matter how you look at it, the Omega Speedmaster Professional is one of the Top 10 watches of all time. It's also the first watch worn on the moon and flight-qualified by NASA for all manned space missions from the Moon to Mars.

My old boss wore a vintage Omega - not like the astronauts or pilots, but a very thin, round, understated timepiece. Probably dated from the late '50s or early '60s. I always thought it was a pretty classy watch.

One of my favorite watches was an early Fossil from Sanger-Harris, about the thickness of 2 half-dollars. Unfortunately, its lifespan was only 3-4 years,

For most of my adult life, I've worn a Seiko two-tone, round dial. My current watch is not Seiko, but has the same form factor (with a Rolex-style prism over the date). I like the Breitling, but would probably never buy one - even if I could afford it - as thick watches, on me, always snag on stuff.

So, if I'm wearing a large watch, it's probably John Cameron Swayze-approved.

The most expensive watch I have is a Seiko 5 Sport. It's my everyday watch. I have an Invicta 6620 chronograph and a Swiss Precimax Deep Blue Pro II chronograph. The last two combined are worth less than the Seiko, but they're nice bling until someone gets a close look or asks you what kind it is.

I want something of substance and you can't deny the pedigree. It's coughing up the cash to pay for it that's a problem.

I have always wanted one. A sweet watch- it would be around long after you're gone.

Where would you buy it?

I have had the old, classic looking gold Seiko (whatever model it is) for omigosh- 25-30 years!?

I bumped into a friendly acquaintance at a jewelry store. We later got together and spent a a year with each other. She remembered me looking at that watch and bought it for me for Xmas.

Every watch has a story