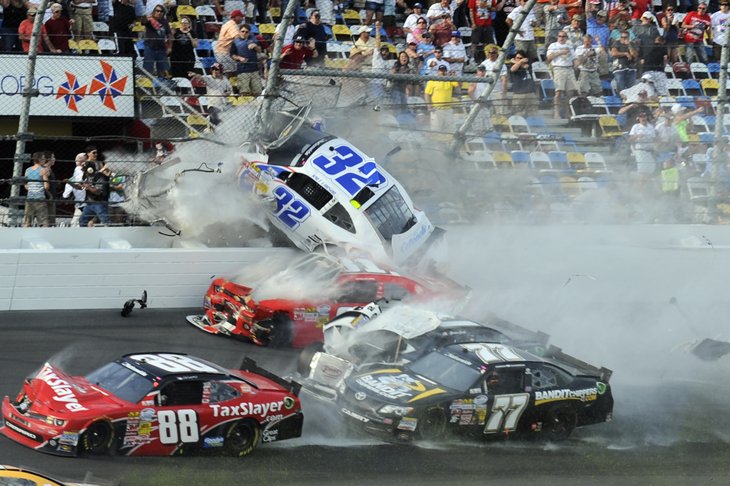 A spectacular crash as cars reached the finish line of the DRIVE4COPD 300 at Daytona International Speedway has injured at least 28 fans. NASCAR Sprint Cup Champion Brad Keselowski punted race leader Regan Smith out of the way going for the win which triggered a multi car chain reaction. In the melee, rookie Kyle Larson's car was turned sideways at over 190mph, got airborne and climbed the safety fence striking a crossover gate and pole which sliced the #32 Clorox car in two. Debris traveling at near 200mph showered fans in the lower and midlevel seating as far as 80 feet vertically above the track.

Details are still sketchy, but reports have said at least 11 fans suffered trauma type injuries. Two were reported in critical condition. 14 of the injured spectators were taken to Halifax Medical Center at DIS, the rest were taken to other local hospitals.

One of the injured was Eddie Huckaby, 53, from Krum. Huckaby was hit with a piece of metal about 3 feet long and 18 inches wide. His leg injury required emergency surgery and he will be hospitalized for 48 hours. Huckaby's brother who was sitting next to him in Row 11 said "When the car hit, debris went everywhere. Tires flying over our heads. It was like a war zone."

He said his brother's leg was bleeding badly, but Terry used his belt to wrap as a tourniquet.

"I'm just thankful to God my 6-year-old granddaughter didn't come today, because she said, 'Paw-paw, it's too hot.' "

The brothers had planned to attend the entire Speedweeks, but Terry says out of respect to his brother he'll probably just watch the race at the hospital.

That tire and the suspension components bolted to it was estimated to weigh 150 lbs.