On Sunday a U.S. Marine who lost both legs in Afghanistan was forced to leave Charlotte's  Moosehead Bar and Grill along with his wife, parents and friends after another patron at the restaurant became verbally combative and the restaurant staff asked the Marine to leave.

According to the Charlotte Observer: "The incident happened after Garrett Carnes, his wife Courtney, their parents, and friends Brett and Nicole Coburn stopped at the restaurant for dinner after attending the Carolina Panthers’ game against Dallas. Several members of the party, including Garrett Carnes, were wearing Dallas Cowboys jerseys.

Coburn said that when the group reached the front door, the fan, who other patrons called Tank, was waiting for them."


“He was standing at the door, and he started harassing us because of the Cowboys jerseys,” Coburn said.

He said Tank told Garrett Carnes, “Don’t use your wheelchair as a crutch.”

According to multiple accounts of the incident, Carnes told the patron – and others who were ridiculing the group for being Cowboys’ fans – that he was a veteran and had lost his legs in Afghanistan.

Members of the Carnes-Coburn party tried to “defend ourselves verbally,” Brett Coburn said.
He said Tank walked toward Carnes in a threatening way, and some other patrons stepped in to break it up.

Neilsen said his employees are trained to separate possible combatants, in an effort to defuse such situations. On Sunday, staff members asked Garrett Carnes and his party to leave, while they took Tank to another area of the restaurant."

More about Garrett Carnes here and Deadspin picks up the story and takes in national here.  The Daily Mail in the UK piled on this morning here.

Meanwhile the Moosehead Bar and Grill is getting slammed with neg comments on Yelp which is here. Moosehead's Yelp rating has "Tanked" to two stars out of five as Marines from across the nation hammer away at the four star rating the bar had this morning.

Josh Watts, errr "Tank" may want to leave the state, or at least lay low for a few months. But as the following photos attest he just ain't that smart. 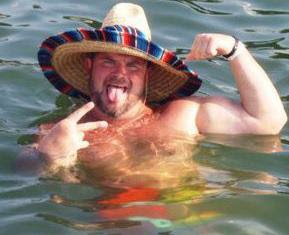 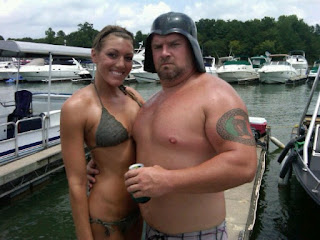 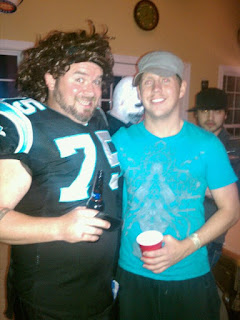 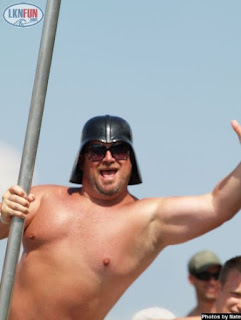 The comments at Cedar Posts are pure gold. Since the story broke Josh "Tank" Watts has shut down his Facebook page. So has Moosehead Bar & Grill. Sounds like Moosehead is about to be overrun with Marines and Tank is the guest of honor. They've also uncovered he works security for the Charlotte Bobcats. Here's his LinkedIn in case you'd like to give him a job reference.

Hopefully, The Cowboys organization will reach out to Garrett Carnes and his family. The least they could do is offer luxury suite tickets and VIP passes for him and his family.

Even with two titanium legs, that Marine could kick that SoS's a$$ into next year.

The business owner/manager better hope a truckload of Marines doesn't drive over on the weekend from Camp Lejeune (typical 4-1/2 hours - but I'm guessing some motivated Jarheads could make it in 3) to explain the proper respect one shows to those who put it on the line for the USA.

I'm not one to talk a lot of smack, but I understand the psychology of it. Still, even from a business perspective, a rookie hospitality manager would know you don't boot a party of eight for the benefit of a loudmouth drunk.

Something else that caught my attention in the linked article:

Tank may never understand or have the kind of sand or class that Cpl. Carnes has. Dedicating his homecoming to his Vietnam Veteran grandfather - awesome!

Although it's probably best for him to lay low for a spell, maybe Mr. Watts will experience an epiphany or catharsis as a result of his boorish behavior, and can redeem himself as a member of society.