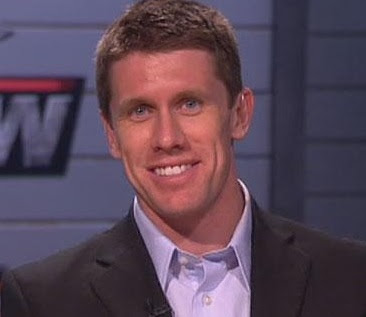 ESPN's Carl Edwards
A little bit of news for NASCAR fans. Roush/Fenway driver Carl Edwards is finally making the long awaited jump to the broadcast booth for ESPN. This was supposedly a done deal before the season started with Carl working weekly Nationwide races for ESPN, then everything went on hold.

Now it appears they are going to take it in bits and pieces for this season at least with Carl working in the Play by Play booth with Allen Bestwick and Andy Petree while Dale Jarrett takes some time off. That's not a bad pair of guys to break into broadcasting with. AB is unquestionably THE premier play by play TV announcer for NASCAR. Apologies to Mike Joy, but Allen is just a notch above the rest.

Maybe it's because I've watched Allen since the old Inside Winston Cup Racing days on Speedvision. I've listened to him on MRN radio coverage. Those old radio guys just have a more intensive description of the action. They had to paint the race in your mind without the aid of cameras. He also suffered the most humiliating treatment a sportscaster has ever been submitted to when he was suddenly demoted as lead announcer for NBC/TNT's NASCAR coverage after he broke his leg in a hockey game and was replaced with the most annoying man in motorsports coverage, Bill Weber.

Did Allen complain? No. He took a demotion to pit road and did his job to the best of his ability. After NBC lost the TV rights, ESPN hired Allen as their Infield Anchor and promoted Dr. Jerry Punch to the lead play by play position with Rusty Wallace and Alan Petree. Dale Jarrett then replaced Rusty who was just too hyper and "homer". Then Allen replaced Doc who just never really fit in the lead PBP position and Doc went back to Pit Road where he has excelled thruout his career and continues to do so.

Now, enter Carl Edwards. A former Nationwide Series Champion and the lead Sprint Cup driver for Ford. It's definitely a coup for ESPN to get a driver of his caliber in the booth and Carl has the chops for TV bits. Whether he has the skills to call an entire race is another story. But if there's anybody that can carry him thru this, it's Allen Bestwick.

More insight on this story at The Daly Planet.

Bill Weber is working as a travelling magician now, "It's a passion I hope to turn into a profession,". True story. So the moral of the story is there's justice after all.
Posted by RPM at 5:11 AM