Here I Am, On The Road Again 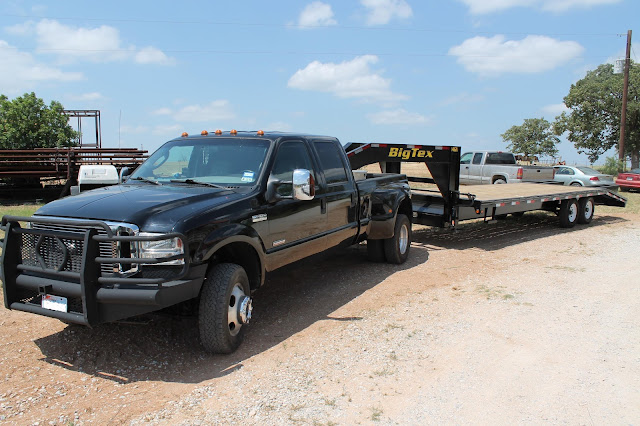 Just got back from my first trip with the F350. I took a couple thousand lbs of oilfield equipment to southern Louisiana. Glad I replaced the windshield wipers because I actually needed them. It rained HARD near Alexandria. I was hoping to bring some of it back, but no such luck.

The truck ran great and I confess to stomping on the throttle and choking every Prius I passed in a cloud of black smoke. Other than the cupped front tires that were on it when I bought it, I had no complaints. Apparently that's a common problem with 4x4 F350's and all terrain tires. I was on the way to get them rotated when I got the call for the load, so I got to listen to them "wa-wa-wa-wa" from here to Lower Alabama and back. First thing I did when I got home was get them rotated off the steering axle.

My stainless steel nerf bars I found for 1/2 price + free shipping on eBay were sitting on the porch when I got home. I'll get those bad boys bolted on tomorrow. I'm 6'2" and I have to climb/slide in. It's a tall truck! My new Scangauge II and Escort 8500 X50 were waiting in the mailbox, too. It's Christmas in May! Now I just have to pay for all of it...

I also got to savor the near Anthony Bourdain-esque culinary experience of Cajun country cuisine. I stopped for the night on the way back in the sleazy part West side of Shreveport. I saw a Wendy's across the freeway from the motel and a chicken sandwich sounded good for dinner/breakfast/theonlythingIateallday.

I hit the drive thru, waited patiently while Mr. "Pants on the ground" guy in front of me got out of his car and dug thru an ice chest in his trunk for another dollar he had stashed, then drove back to the motel and pulled the hunk of charcoal they claimed was a chicken sandwich out of the bag. It was blacker than the person that cooked it  my truck's bumper.

I was hungry enough I ate it anyway after scraping as much pure carbon off it as possible. I wasn't about to take it back and demand a new one because they screwed up so bad. I think there would have been an extra effort made to season a new one with special sauce.