The Return of South40 Slim 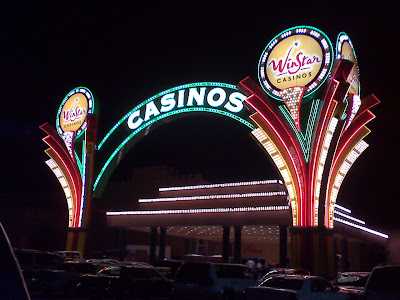 I decided to take a short roadtrip and headed off to Thackerville, Oklahoma and Winstar Casino. They had an 80 player tournament tonight and I signed up. $100 buy-in for $3,000 in chips. After my last outing to Comanche Red River I was confident that I would not make a fool of myself playing in a tournament. I also added a new twist wearing my sunglasses and Time Bandit hat. Luck is where you find it.

I did fairly well and had a respectable stack for quite a while, but good cards were hard to come by tonight. King eight treated me well as I won 3 hands with it in the hole, one of them all in. Other players even started to remark about my luck with it. Dance with the one that brung ya!

I made it thru the first break at the 90 minute mark and had $5-7000 in chips. The biggest stack at my table was around $20k. After the break they started shuffling players to fill tables. Apparently my table was going to be one of the finals because they kept filling our seats and the original players stayed put. This ment the competetion was getting tougher fast at my table as winners moved in.

As I said cards were hard to come by and slowly but surely I was losing my stack. I tried to keep from being a calling card, but when you have decent hole cards it's difficult not to pay to see the flop. As the blinds went up it was clear I had to make an aggressive move at a big pot or it was just a matter of time before I was gone.

Not a good finish, but it was better than 72nd.

you played it perfectly that should be all that matters.