Apparently life is not a bowl of cherries for Johnny Football: 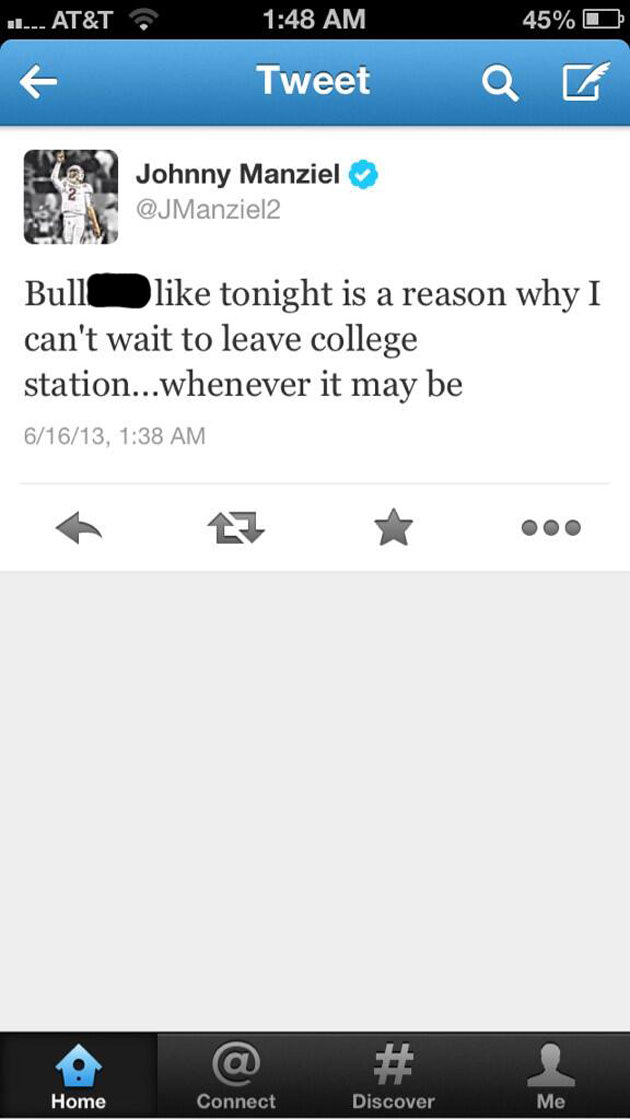 He quickly deleted the tweet (not before it had been seen by approx 360,000 followers) and put this up:

I'm sure that instant celebrity status is hard to deal with, especially as a 20 year old college athlete at a program like A&M. They have rules about rules concerning rules that you have to put up with (all while they're making Millions off you). Just because you are suddenly a big shot doesn't mean you don't have to adhere to those rules and restrictions.

Perhaps he could use some guidance from a few players that have walked in his shoes and come out smiling. RG3 and LaDanian Tomlinson are a couple recent Texas athletes that come to mind. Both were under heavy NCAA and media scrutiny, yet you never heard anything bad and they went on to big money NFL contracts.

One thing strikes me odd about this. Look at the timestamp of the tweets. The deleted message is marked 45 minutes before the "walk a mile in my shoes" tweet that came after. Only thing I can think of is they were taken in different time zones which would make them 15 minutes apart.
Posted by RPM at 2:07 PM

Middle son just completed his first year as an Agro-American - he is 'eat up' with the maroon life.

Me, I'm proud he's attending an excellent university, but am a bit more circumspect - remembering a job about a dozen years ago when the President, SVP, and all of the other VPs were ags and I wasn't (NTSU/UNT). They don't necessarily exclude you, but don't go out of their way to be inclusive, either.