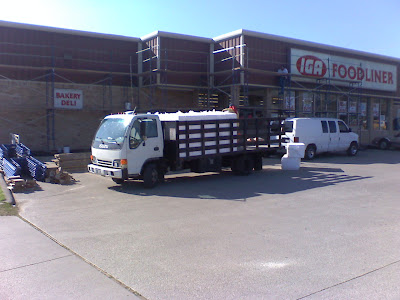 Just yesterday I posted at Silicone Alley's that I thought Bridgeport was the next store to get remodelled and rebranded. So today I pull in the parking lot and TA-DA! Scaffolding is being erected.

I should have told her I was about to get a huge raise...

Anyway, Bridgeport's IGA is now renamed Foodliner MarketPlace. Not sure how long they will hang onto the Foodliner bit, either.

No, they didn't sell the store. Quite the opposite. We have purchased several stores over the last couple of years in Chico, Nocona, Gainesville and Denton. The Gainesville store was already called MarketPlace. That's where the name came from. During the purchases we switched primary warehouses and are no longer an IGA. Now we are an Affilliated store. We still buy some things from our old primary supplier, but you won't find any more "Parade" items. You'll find "SureFine" on the shelves now.

Before it's all said and done all our IGA's will be renamed MarketPlace. Same people, new name.

Expect the entrance to be fubar for about a week.
Posted by RPM at 11:45 PM

Just glad you still have your job- regardless of name.

What is the purpose of a new name, a new storefront and business as usual inside?

Well, we hope business as usual is what you want. We try very hard to give you the best. Bridgeport is limited to what we can do because of the size of the building and our customer base. But we always try to maximize what floor space we have and give you the best selection, quality and price.

I also hope you get the best customer service in town. That's our #1 goal and what I personally try to make happen every single day.

I know I sound like a commercial, but I take my job seriously and have pride in my work.