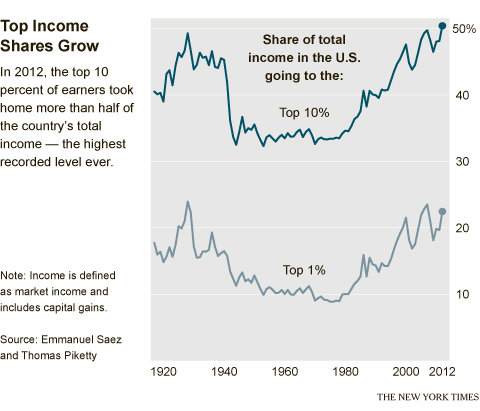 WASHINGTON (AP) — The income gap between the richest 1 percent and the rest of America last year reached the widest point since the Roaring Twenties.

The top 1 percent of U.S. earners collected 19.3 percent of household income in 2012, their largest share since 1928. And the share held by the top 10 percent of earners last year reached a record 48.2 percent.

The new data shows that the top 1 percent of earners experienced a sharp drop in income during the recession, of about 36 percent, and a nearly equal rebound during the recovery of roughly 31 percent. The incomes of the other 99 percent plunged nearly 12 percent in the recession and have barely grown — a 0.4 percent uptick — since then. Thus, the 1 percent has captured about 95 percent of the income gains since the recession ended.

Read more about it here and listen to an analysis here.
Posted by RPM at 8:18 PM